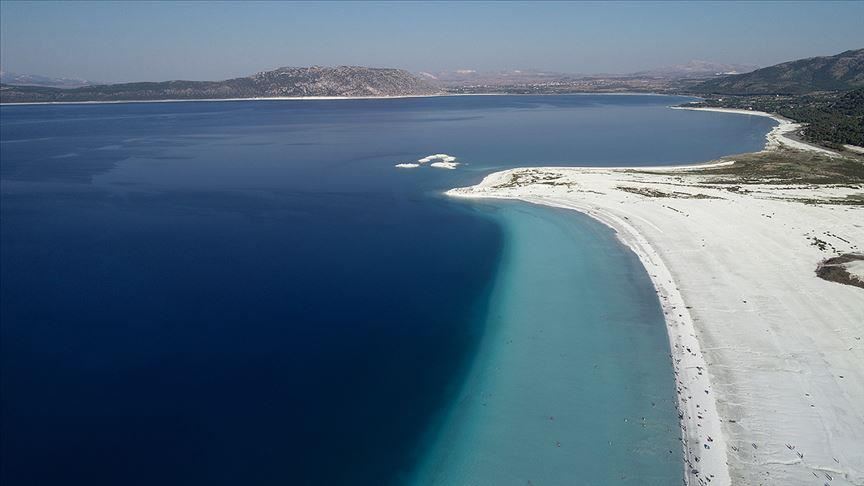 Lake Salda is the deepest lake in Turkey and the second deepest lake in the World with a depth of about 185 meters. Situated in the southwestern Turkey, within the boundaries of Yeşilova district of Burdur Province and lying on a 45-square-kilometer area, Salda is home for sea dragons and 110 types of birds. Because there is precipitation of MgCO3 (magnesite), there is no vegetation cover on the three sides of the lake. Because of its geological structure, it can shed light on the forming of the first living organisms and several scientific studies were conducted in the area.

On June 31, 2019, the Housing Development Administration (TOKİ) had announced the planned construction of the “Lake Salda Nation’s Garden”. This “Nation’s Gardens,” named by President and Justice and Development Party (AKP) Chair Recep Tayyip Erdoğan, intended for recreational facilities built by the government.

After the reactions on social media (with the hashtag #SaldayaDokunma (Don’t touch Salda)) the Project had been cancelled. However, during these days, when Turkey and the World are struggling with the coronavirus, as reported by online newspaper indigodergisi on March 15, the construction works of “Nation’s Gardens” has started and containers were brought around the lake by the tenderer and some areas were identified with white lines for concreting.

There is a change.org campaign that was opened in summer 2019. You can reach the campaign by clicking the link below:

Salda, should not be destroyed by any reason or rant, annuity of private company. Salda, the deepest lake of Turkey, is located in Yeşilova, Burdur. Thousands of tourists come to see Salda Lake to see it’s turquoise colored lake and white sands.

Despite of being the deepest lake of Turkey, Salda is the third deepest lake of the world.  The depth of the lake can go up to 185m. Interestingly, there is a similarity between Salda Lake and Mars. Both have white magnesium loaded rocks. The area of the lake was announced as 1st grade natural site area in 1989.  For this reason, building construction around lake was prohibited. The lake is rich in terms of its minerals, due to soil properties. The water of lake is a cure for certain skin diseases. Municipality provides service, so that tourists are able to swim and camp around the lake.

If you want to visit Mars, visit Turkey. That’s where you’ll find lakes so salty that the only bugs able to live there are species that could probably survive on Mars as well.

For that reason, microbiologists in Turkey have surveyed the array of species that inhabit the Acigol, Salda and Yarisli lakes. They’re hopeful that studying some of them will yield useful insights into the kinds of biology that could help microbes exist on Mars or other potentially habitable planets and moons.

We are the people of Turkey, want Salda Lake to be World Heritage.

Number of coronavirus cases in Turkey can reach 30,000 if people are not careful, ministerial council member warns